I spent the weekend in Toronto and visited with Za Nuziata and her family. In Aprigliano, Za Nuziata lived next to us in la vinella – the small alley-way that was our street. Nuziata’s grandmother and my grandfather were brothers-and-sisters. This is another branch of the Perri family. 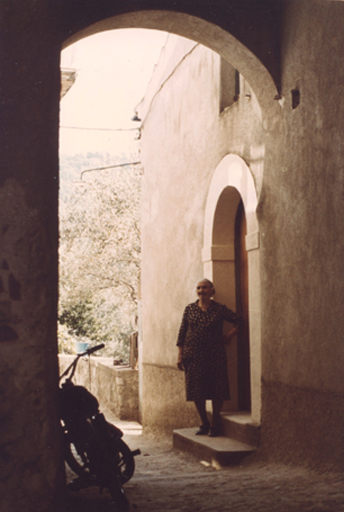 When I visit Za Nuziata, I am Marru or Marruzu Mio – an endearment of long ago; an endearment that puts me back in la vinella playing hide-and-seek in the doorways, running up and down the stairs, aiming my slingshot at the swallows’ nests.

Nuziata is the youngest of 5 children whose mother died when Nuziata was 22 months. And her father’s sister – Za Peppina made a decision not to marry and instead raise her brother’s children. The image is Za Peppina in front of her house. The door – il portone – led into their house. The small opening in the low wall, at the end of her house was the stairs down to our house. There was a second, smaller door into Za Peppina’s on the stairway that led down to our house. I have memories of going in and out of that side-door.

Za Nuziata’s nephew – Gabriele – was one of my best friends. Gabriele, Franco-e-Crocca, Corrado and I were the group-of-four. (In our Calabrese dialect, Gabriele got its r-consonant switched and became Grabiele.) Franco and Gabriele lived next to each other. Our days were spent going back-and-forth between one end of la vinella – my house – and the other end of la vinella the road that led to Corte, to Santo Stefano, to Guarno.

Gabe, as he’s now called, owns a large construction company. I co-founded a charter school that runs a 10 million dollar budget. Franco-e-Crocca is a partner in and accounting firm. (Three of the group-of-four made it into partnerships, company founders or presidents. Corrado is the only one didn’t aspire to corporate heights.) Gabe lives in Toronto; Franco-e-Crocca and Corrado live in Cosenza; I live in Pittsburgh.