sons of the great or sons unknown 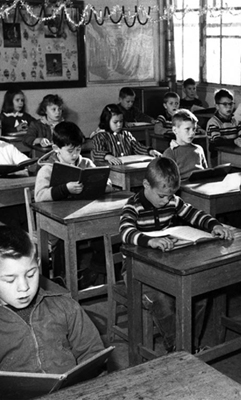 It was my first year at St. Veronica’s. (My family had bought a house in the West-end; we had left my grandparents’ to live on our own.) The classroom, compared to the one I came from, was old fashioned. We had wooden desks with holes in the upper right hand corner for ink-wells. And filling them was the jobs of the “good” kids. There was a piano in the room and Sister Drusilla taught us to sing while sitting on its long bench. (Our music book had Santa Lucia in it. Well, the English version of the Neapolitan song.) Above the piano was a bulletin board and Frank’s birdhouses, that he build for his Science project, hung there. That Friday, we had one of the itinerant teachers and Sister Drusilla kept coming in from her office to give us the latest news on the President. When she came in to tell us that he had died, I remember looking up at the black-framed, round, analogue clock and saw that it was a-quarter-to-four. (In those days no one said, 3:45.) Sister Drusilla’s announcement seemed to suggest that even though one of our own had finally made it, they had killed him. Was she suggesting that the American president was like Jesus?

Frank and I went home that afternoon confused by the day’s events, but knowing something important had happened. And even though we lived in a small town in Northern Ontario, we were somehow part of it.

Five years later, I would leave Sault Ste Marie and Canada forever and make my way to the land of President Kennedy, to a more congenial spot for happily-ever-aftering.