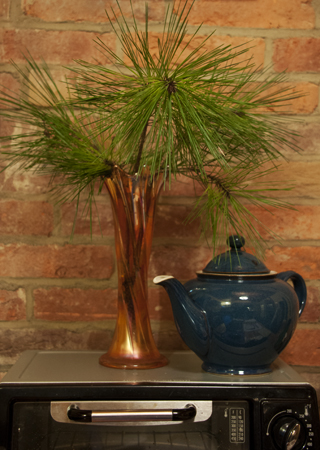 The snow was so heavy on Monday that I needed to get it off the White Pine or risk it snapping the over-hanging bough. Using a broom, I hit most of the snow off the umbrella-like tree. 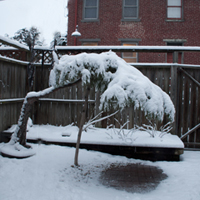 That got rid of the snow, but also broke off some of the small branches. Some info about the White Pine – it originally was a bonsai, and then one one day I put the pot on the ground to keep the soil moist and by the time I got to is again, the tree roots had started to grow into the ground. I’ve left it and now I have a huge tree growing out of a bonsai pot. Each year I sand off a small section of the main trunk in an attempt at creating a curve that begins at the pot-level and continues into the cascading green needles. The branch holding up the cascading branch is from the old fig tree. (The last time we had a major winter-storm, the snow toppled the tree out of its pot.)

At first, I left the broken boughs in the snow, but then decided that they could look interesting in a vase in the kitchen. It was well after midnight when I started shooting the images and loved the soft colors the non-flash setting produced. I particularly liked the retro toaster-over that the tea-pot and vase are sitting on. The wall, I stripped of plaster while Ronald Regan was down the street visiting a community employment program, the tea-pot is from an English dish set that I like and the vase is old carnival glass. (The vases were prizes at Kennywood at the various gaming booths.)