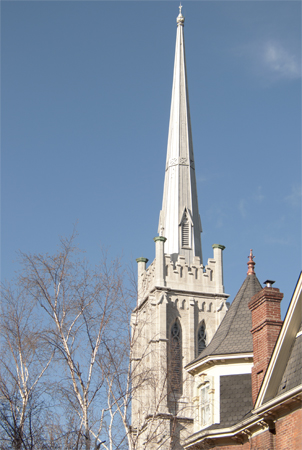 Kingston is full of church steeples. But unlike New England, the ones here in the capital of Upper Canada are made of white limestone. (They have the look and feel of the colonial steeples of New England, but are much much taller. Guess you could do that when you’re not using lumber. Also this is not a heavily forested area.) Geologically, the Kingston area connects the Algonquin Dome in north-central Ontario with the Adirondack Dome in New York state. The Queen’s University buildings, The Royal Military College, the Martello Towers, the old mansions are all made from the limestone found in the area.

Besides steeples, the area is full of commemorations to Sir John A. Macdonald a Scottish-born Canadian politician and the Father of Confederation. He was the first Prime Minister of Canada (1867–1873, 1878–1891). (Macdonald was the leading figure in the discussions and conferences which resulted in the British North America Act and the birth of Canada as a nation on July 1, 1867. A hundred years later, in Sault Ste Marie, the city build the centennial library to commemorate the founding of Canada.) Macdonald’s greatest achievements were building and guiding a successful national government, forging a strong Conservative Party, promoting protective tariffs and building the transcontinental Canadian Pacific Railway.

I promised Seane I would visit again, because I want to take the 1000 Islands boat tour and the old city bus tour. I know enough about the area and the city that the tours could be a way of stringing all the random information together.