It used to be that every K-8 school made an outdoor ice-rink during the winter months and recess time was spent playing hockey with-your boots on or shoveling the snow off the ice. There were also city-rinks that were open week-days well into the night and all weekend. These city-rinks had hockey leagues, lessons, open skating and even couples-night. The attraction was the hours, the on-site attendant and the warming shacks. We would skate until our toes frozen and then we would run into the shack and try and get warm. The shack was a room with wooden benches around the perimeter and an oil heating unit in the middle. (I can still remember the distinct smell associated with oil burning furnaces and warming stoves.) 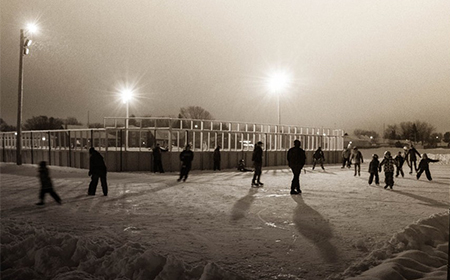 The city-rink across from my aunt-and-uncles on Henrietta Street, is named after William Merrifield a World War I Canadian soldier who was awarded both the Victoria Cross and the Military Medal for gallantry during the mud and carnage at the Battle of Passchendaele, Belgium. Following the Great War, Merrifield settled in the Sault and worked at the Algoma Central Railroad. He died in August 1943 and was buried in West Korah Cemetery.

I had no idea Merrifield was buried in West Korah Cemetery. Connie took me to the cemetery, because many members of Ron’s family are buried here. West Korah Cemetery was used by the “English” families of the west-end. All these years, I had no idea who Merrifield was or his connection to Sault Ste Marie. I just knew it was one of the many “English” names tagged on public schools and spaces throughout town.

The Merrifield rink is very popular and ended up adding a second, no-boards rink for kids. (I have this memory of Dave taking little Seane out to the Merrifield rink to try out her new skates and she crying and absolutely refusing to move. Seane won the argument and never did get to skate.) The above image shows mainly the no-boards, kids rink.
.