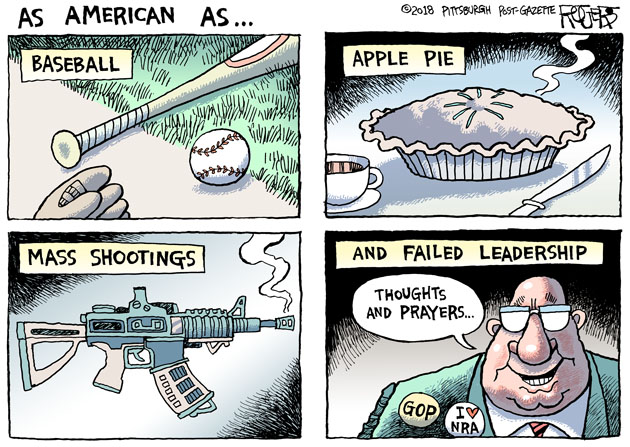 Parkland. Las Vegas. Sutherland Springs. Newtown.
On and on: In America, mass shootings have become so familiar that they seem to follow the same sad script.

He will be a man, or maybe still a boy.

He will have a semiautomatic rifle — an AR-15, or something like it — and several high-capacity magazines filled with ammunition.

The weapon will have been purchased legally, the background check no obstacle.

He will walk into a school, or a concert, or an office building.

And he will open fire into a crowd of innocents.

Even as he’s still firing — crack crack crack — word will begin to spread. Survivors huddled in closets or behind bandstands will send pictures, text messages, and videos into a world that is again aghast.

Televisions will play the videos recorded amid the carnage, the sound somehow worse than the images. The fear in the victims’ voices will be familiar, yet too potent — a sound outside the boundaries of our own empathy.

We will hear about the heroes: Teachers who barricaded their classrooms or threw themselves between their students and the gunfire; concertgoers who shielded strangers as bullets plowed into their backs.

And we will hear about him: He was strange and troubled and cruel to animals; he’d shown signs of mental illness; he lost his job;
he beat his wife.

A chorus will rise to ask why anybody should own such a weapon, much less someone so obviously troubled; another chorus will accuse the first of politicizing tragedy. Some will point to the Second Amendment, and blame a lack of treatment for the mentally ill.

Politicians, and then the president, will emerge. Some will plead for new laws. More will ask only for thoughts and prayers.
Some will not mention guns at all.

Any promises will be broken. Beyond the shattered orbit of the school or church or concert that became a shooting gallery,
the whole thing will recede too soon into memory.

And then it will all happen again.

Whoever he is, he may already have the rifle. And he will follow the script.

There are only three things we don’t know about the next time:

WHO, WHERE, AND HOW MANY?