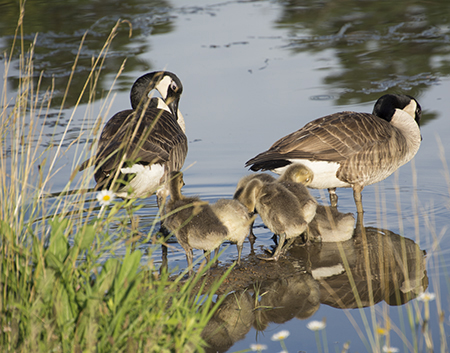 After reviewing the shots, on the memory-card, I was amazed by the light in some of the images. The geese and goslings were in the direct path of the diffused evening light. (the sun is setting on the right hand side) I made no alterations to the image. What you see is what the camera captured.

For years, I’ve been shooting in afternoon light. I like its harshness; its extreme; its contrast. What’s been missing though is softness, but that was the trade-off. Also, afternoons were the time when I was out. I only started walking in the evening, because it’s been miserably hot during the day. I also kept thinking that evening light would be nothing more than a reduction, shrinking the majority through shadows. Instead, I began to see that objects, low to the ground, got bathed in delicate light; that branches grabbed the fading rays; that berries and fruit gleamed in the indirect glow. It never occurred to me that evening light could bring a new dimension a beautiful clarity to the objects I was shooting.

Earlier in the week, while reviewing my cable and Internet options, I upgraded to 5G. And the technicians are coming Tuesday to make the necessary adjustments. However, since the conversation with the agent, I’ve been noticing a degradation of my connectivity – movies and music weren’t streaming; and tonight, I just lost all access. Going in to reconnect, I noticed a new network, same name as the old except for the 5G add-on. I tried connecting using the old password and it accepted it. All of a sudden, I’m running on 5G and everything is streaming. Good-bye net-neutrality, hello higher costs.