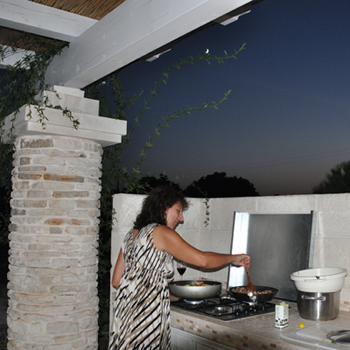 Today’s farmers-market find was new potatoes. So for supper we had pipi e patate – fried red pepper and fried new potatoes. We also saw Borlotti beans and even though they were mature, we bought a kilo. So along with our pipi e patate, Rose also stewed the beans. This is the time of year for big, red peppers, new potatoes and mature beans.

In the image, Rose is cooking at the outside kitchen. One pan has the pipi e patate, the other the beans.

Growing up, pipi e patate were a staple. Often, the left-overs made it to my lunch. (Tonight we did not eat them with bread, but Rose and Derrick did sprinkle finely chopped Rosemary on theirs.) And as much as I like them, I’ve resorted to just frying the peppers; frying the potatoes takes too much work.

The mature Borlotti were really good. The beans were plump and very tasty. They’ll probably find their way to a pasta dish tomorrow night.