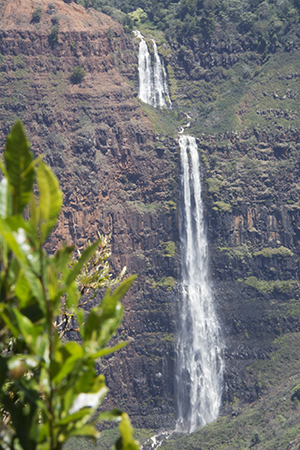 I don’t remember seeing this full of a waterfall on any of the other visits to the canyon. But then there have been a lot of clouds this week and we had a major rainstorm Tuesday night.

The ride down is very disorientating and can feel like sea-sickness – nausea and headache. But lunch settled all stomachs and we proceeded down to Poipu Beach. This is the land of the true tourists; locals are absent and the place reeks of money. (There are million dollar homes with no property, built against the black rocks of the shoreline. But they have a million dollar view of the setting sun.) The appeal of the south is the sun and the tourists. Locals do not live in the Poipu area; they come in to clean and at the end of their shifts leave by bus. All the major hotel chains are down here and the Grand Hyatt is the Vatican of 20th century American consumerism. It’s grand lobby and multi pools celebrate American excess. The complex is as grand as any of the robber-baron mansions of Newport. The difference is that it won’t last, because after all it’s all prefab cheap construction make to look like a Frank Lloyd Wright prairie house.