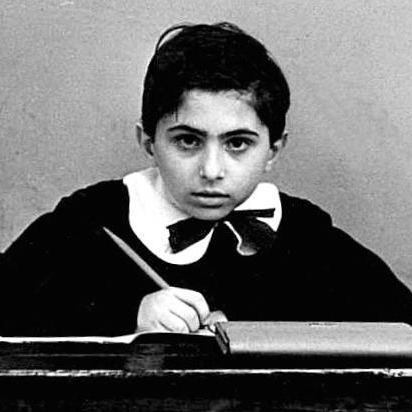 There’s actually a picture of my 3rd class in Aprigliano, me in my smock and collar and bow.; I just can’t find it. (I sent my friend from back then – Franco Ciaccio – a FB message asking if he has a copy of the pic.)

The school was on the second floor of a local house just around the corner from where we lived. There were only two classes and they were across the hall from each other. Back then, like in so many other small towns in Calabria, there were enough kids to warrant having these small, two-room schools. It was also after the war, and new construction, new schools weren’t affordable. (I remember the teacher showing us a film-clip imploring its audience to not go near anything that looked like a grenade or bomb. The Germans had left many live land-mines throughout rural Italy and the government wanted kids to stay away from such dangerous war relics.)

Withing ten years, Calabria would be empty, its people leaving, in droves, for Canada, Argentina and Australia. The one and two room school-houses would be consolidated into regional schools.

The picture on the right is me in August of 2006 in front of the school-house door. The B&W image is from the FB page Calabria Ieri e Oggi.