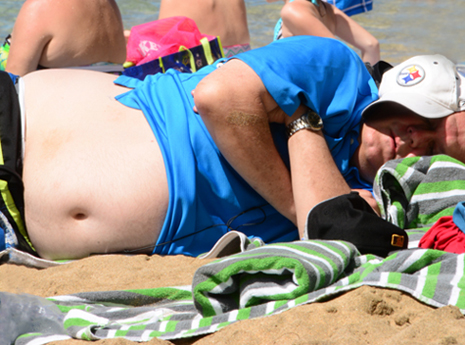 What a piece of work is man
How noble in reason
How infinite in faculties
In form and moving
How express and admirable
In action how like an angel
In apprehension how like a god
The beauty of the world
The paragon of animals
Hamlet, Prince of Denmark – Act II, Scene II

After spending a week in Kaua’i, there are many images in my head, but the most jarring ones are of very overweight, white males in their 40’s and 50’s. The image above was taken at Ke’e Beach and he was one of many men with huge bellies or with rolls and rolls of fat. The skin is so tight over a massive protuberance that made the seeing a bug-eyed experience. When did this happen? When did American males of a certain age become blimps? When did it become OK to lie on the sands like a beached-whale? When did it become sexually OK to appear half-naked with a whale-like body?

There was a time in America when hard work defined who we were; when sacrifice and delayed gratification were the hallmarks of empire builders; when the ideal male was lean and sinewy; when we didn’t have time to lie on a beach and bake in the tropical sun. But that time is gone and today we work in air-conditioned offices, sit on plush chairs and push keys; we feel good when we order diet instead of regular Coke; we have Amazon deliver next-day; and fat people are no longer socially unacceptable. As a matter of fact, people aren’t fat, they’re horizontally challenged; girls with big butts are chic. Welcome to 21st century America.

I want to believe that the march to obesity started back in the late 70’s/early 80’s when the American food giants gifted us with that amazing convenience called fast-food. (I was living in Brooklyn and we all wanted to get out to the suburbs to eat at the golden arches.) I remember friends taking their children to McDonald’s, Roy Rogers, Burger King on a regular basis. Happy Meals, roast-beef burgers and crown were all desirable configurations, options and toys. I remember when Chicken McNuggets were introduced and we would run up to the shopping center for a lunch of mcnuggets and fries. (Wendy’s was considered the healthy fast-food and it had a girl’s name. The high-brows could go there and not feel bad.) And back then, no one talked about nutritional bankruptcy, trans-fats or artery clogging.

The new foods were the latest fad for a generation raised on fads. But the children became guinea-pigs for the industrial-food giants. The children on the late 70’s/early 80’s had no say on what their parents fed them. And the parents had no idea what the new foods would do to their children’s metabolisms, to their children’s bodies. And now, we ring our hands, run news-clips, design cars for the new American body and argue and argue.

There’s also a political dimension to the obesity argument. In America, consumption is our GOD. American is about buying and consuming as much as possible. (Why do we pay no attention to old people? They have lost their consumer power.) In Kaua’i consumption takes the form of time-shares, million-dollar homes on golf-courses, gated-communities, condos and condos and condos. All these accommodations have ensuites and vast networks of pools and saunas for their clients. The economy of the island is catering to the hordes of mainlanders that fly in to spend a week or two at the time-shares, the million-dollar homes, the condos, the fancy hotels. And the target audience for these amenities is the over-indulged middle-class. And is it any wonder that one demonstrates his/her membership in the over-indulged middle-class with his/her distended body? Fat rolls and whale-like dimensions are credentials of membership.